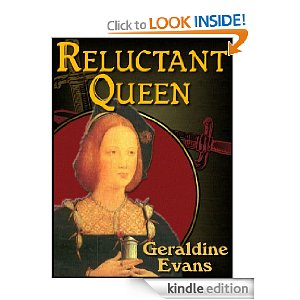 Mary, the beautiful, younger sister of English king, Henry VIII, reluctantly agrees to marry the aged and sickly Louis XII of France for reasons of state. But before agreeing, she extracts Henry’s promise that she may please herself for her second marriage. Mary is deeply in love with the low-born Charles Brandon, her brother’s boon companion, and is determined to wed Brandon should King Louis die.

Unhappy at the French court, blonde Mary makes friends with the charming, but debauched, Francis, her aged husband’s heir and son-in-law. But Mary is dismayed when her friendly overtures are taken as encouragement for something more than friendship. Too late, Mary finds that, even at twenty, Francis is a practised seducer. He pursues her relentlessly. And with the death of her husband and Francis’s elevation to the French throne and absolute power, her situation becomes desperate. Unprotected, Mary is a captive prey to Francis’s lust for her.

Will she ever be free to go to her lost love? Because since Louis’s death, Mary has become increasingly anxious about the rumours she hears concerning her brother’s plans for her future. Did Henry intend to push her into another loveless marriage to suit himself and the State?

King Henry sends Charles Brandon to the French court on a diplomatic mission, Desperate, Mary persuades him to go through a secret marriage with her. Then they confess to Wolsey and ask him to intercede with King Henry.

Fearfully, they await King Henry’s reaction, aware that no one, not even his much-loved younger sister, defies him with impunity.
My Review:
I’m a sucker for anything to do with the Tudors, and Reluctant Queen by Geraldine Evans was no exception. There are hundreds of novels on Anne Boleyn, Elizabeth Tudor, Henry Tudor, Henry’s daughter Mary Tudor, etc., but one of the Tudors who I have read very little about is Henry’s little sister Mary Tudor. Of course she is almost always mentioned in books that I’ve read on that time period, and we know that she defied her brother, the King of England, to marry his best friend, but beyond that I knew very little about her. Her life definitely seems to have been too short, and it doesn’t seem to have been full of a great amount of happiness, but like her older sister and brother, when she wanted something she went after it even when it went against the wishes of others.
Geraldine Evans did a wonderful job of bringing Mary to life for me. I had no idea that she even had more than one child with Charles Brandon. Frances ended up becoming another semi-infamous Tudor, so she is known in history, but not much is heard of her other two children. I love how the author allows the reader to see what was possibly going on inside Mary’s head during her life. The reader is able to see the regrets that she possibly had over her marriage to Charles, as well as her mental and physical pain during the latter years of her life. It is apparent in the books that I read on Anne Boleyn, and also in this novel, that Mary did not like her and didn’t hide it very well. It was interesting to view the demise of Henry and Catherine’s marriage through his sister’s eyes in this novel.
The only complaint I have would be on how Anne Boleyn is portrayed in this novel. I cannot tell a lie, I am an Anne Boleyn supporter. Another issue I had is a factual inaccuracy. In the novel when Mary is Queen of France and Anne is one of her little lady’s in waiting there is a line which says, “Mary felt that she and Anne shared a special bond—had they not both lost their mothers around the same age? And although Anne still had a father, he was over-ambitious for his children […]” Anne’s mother did not die until around a year after Anne had been executed by Henry VIII.
Other than those two issues I thoroughly enjoyed this novel, and I learned a great deal about Mary Tudor, Dowager Queen of France and Duchess of Suffolk. During a time when women did as they were told, Mary went against the grain and chose her own destiny, which always makes for an interesting Tudor Era read!
This novel gets 4 out of 5 stars from me!
BUY RELUCTANT QUEEN HERE!
at 2:33 PM