WORTH DYING FOR by N. Gemini Sasson: Review & GIVEAWAY!!! 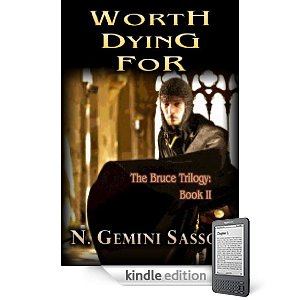 The rise of Robert the Bruce. The vengefulness of James Douglas. And the ruin of Edward II.

Robert the Bruce has known nothing but hardship since seizing Scotland’s crown. Parted from his wife and daughter and forced to flee through the Highland wilderness, he struggles to unite a kingdom divided by centuries old blood feuds. The price, however, must be paid in lives and honor.

Falling to temptation, Robert’s only means of redemption―and to one day win his wife Elizabeth back―is to forgive those who have wronged him. One by one, Robert must win back Scotland’s clans and castles. The one man who can help him purge the land of English tyranny is the cunning young nobleman, James ‘the Black’ Douglas, who seeks vengeance on those who took both his inheritance and his father’s life.

With the death of Longshanks, Edward II ascends to the throne of England. His first act as king is to recall the banished Piers Gaveston. Too soon, Edward learns that he cannot protect the one he loves most and still preserve his own life and crown. To those who demand the ultimate sacrifice, he must relinquish all power. To have his revenge, he must do what his father never believed him capable of―defeat Robert the Bruce on the field of battle.


After reading the first novel in The Bruce Trilogy by N. Gemini Sasson, The Crown in the Heather, I was hooked and already counting her among my favorite authors of historical fiction. I immediately bought the second novel in the trilogy, Worth Dying For, and I also bought her novel Isabeau, because after reading the first novel, I knew that Sasson was an author who will remain among my all time favorites. I only wish she had written a hundred  more novels, so that I could own them all! I know I sound a little over the top, but I guess I’m the type of reader who discovers an author that I like, and then reads every single one of their novels!
Anyways, what I’m trying to say is that I loved the second book in The Bruce Trilogy just as much as I loved first one. I have so much anticipation built up for the third and final novel in the trilogy! I can’t believe that I have never read a historical fiction novel dealing with Robert the Bruce’s life. I’ve read hundreds of books dealing with royalty and also dealing with the time period that The Bruce was alive, but somehow either I missed the books, or maybe there just aren’t many historical fiction novels dealing with The Bruce. Plus, there’s also the fact that in the majority of books that I’ve read that did mention Robert the Bruce, he’s portrayed as a horrible traitor, and is given no redeeming qualities. I enjoyed getting “his” side of the story!
Sasson also brings other legendary men to life; such as the brave and ruthless Scot, James Douglas, and the cowardly, fey-like Edward II of England. I really like how the narrator switches between different men involved on both sides of the war between Scotland and England. As a reader you’re able to get a more balanced point of view, and to understand more than just one side of the story. Although it's obvious that Robert the Bruce is the hero of Sasson's novels, it's still nice to see things from his perspective as well as Edward II. I’ve always preferred to read books from multiple P.O.V.’s, because it makes the novel more rounded as a whole.
Sasson’s research and writing style are, in my opinion, flawless. I know that I sound like I’m gushing, but I really am THAT impressed with her novels. I love a good historical fiction novel that is so well researched, and written so well, that by the end of the book I feel like an expert on the content. I honestly think that a show about Robert the Bruce's life would be as popular as THE TUDORS or THE BORGIAS on SHOWTIME! If her novels were turned into a SHOWTIME series the world would fall in love with Robert the Bruce, and of course the author, N. Gemini Sasson.
Ok, so now that I’ve gushed about how absolutely fascinating THE CROWN IN THE HEATHER and WORTH DYING FOR are, how does everyone feel about the fact that N. Gemini Sasson has offered to give TWO of my readers a copy of the first book in the trilogy, which is THE CROWN IN THE HEATHER!
The winner of the giveaway will have their choice between a signed paperback copy of the first novel in the trilogy, or an ebook compatible with Kindle.  If you are a fan of historical fiction, then I think it’s impossible not to love this book.
Now, onto the good stuff! The GIVEAWAY!
Mandatory Entry:
+1 In order to enter the giveaway you must be a blog follower and leave a comment including your email address.
Additional (Bonus) Entries:
+1 Follow me on TWITTER
+1 Tweet this giveaway (leave the link in comment)
at 12:42 AM

Labels: book giveaway, giveaways, historical fiction, n. gemini sasson, robert the bruce, the bruce trilogy, the crown in the heather, worth dying for