The Queen's Gambit by Elizabeth Fremantle

Widowed for the second time at age thirty-one Katherine Parr falls deeply for the dashing courtier Thomas Seymour and hopes at last to marry for love. However, obliged to return to court, she attracts the attentions of the ailing, egotistical, and dangerously powerful Henry VIII, who dispatches his love rival, Seymour, to the Continent. No one is in a position to refuse a royal proposal so, haunted by the fates of his previous wives—two 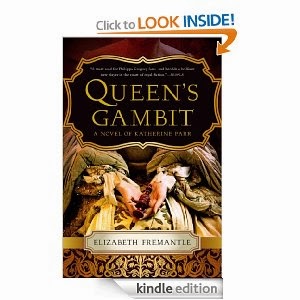 executions, two annulments, one death in childbirth—Katherine must wed Henry and become his sixth queen.

Katherine has to employ all her instincts to navigate the treachery of the court, drawing a tight circle of women around her, including her stepdaughter, Meg, traumatized by events from their past that are shrouded in secrecy, and their loyal servant Dot, who knows and sees more than she understands. With the Catholic faction on the rise once more, reformers being burned for heresy, and those close to the king vying for position, Katherine’s survival seems unlikely. Yet as she treads the razor’s edge of court intrigue, she never quite gives up on love.

The Queen’s Gambit by Elizabeth Fremantle was an all around, excellent book. I loved the author’s writing style, and also how she portrayed Henry VIII's sixth queen, Katherine Parr. I also enjoyed reading about the lives of the two people closest to Katherine, Dot and Meg. I’ve read a few novels about Katherine Parr’s life, and prior to this book I viewed her as the ‘boring' one of Henry VIII's six wives. Elizabeth Fremantle was able to really bring her to life in this novel. I also love how she brought Dot’s story into the novel to show how the normal people who inhabited the world of kings and queens lived. Dot’s character was easy to get attached to, because she was very likable, and it was sweet to see her love affair progress.

The author’s writing style was fantastic. She was so descriptive, and used a lot of figurative language as well as imagery in her descriptions of people and places. As an English teacher, I can appreciate good use of figurative language!  I applaud the author for staying as close to historical fact as possible, yet still keeping the novel extremely interesting. I love when an author of historical fiction relies more on fact than fiction, but is still able to really bring the characters to life for the reader. I really enjoyed how the novel was ended, it gives the reader something to think about, kind of a 'what if' scenario.

The story of the first and only woman to invade England

I was educated at a grammar school in Essex where the teachers wore mortarboard hats and long gowns and we had the names of ex-students killed in the two wars inscribed in gilt either side of a massive organ.

At morning assembly our headmaster appeared out of a door halfway up the roll of honour and spoke to us from a pulpit. He had white hair and dust in the creases on his face.

It was like having God himself lead morning prayers.


We were told in history classes that England had only been invaded once, in 1066, by William the Conqueror. What was worse, I had the impression that this sneaky Frenchman shot our ruling king, Harold, in the eye. ‘But no one has ever invaded us since!’ It seemed like a point of honour.

I do not recall Queen Isabella’s name ever being mentioned. Was I asleep during that lesson? It’s possible. Or was it, you know, she was never mentioned because she was a woman and she was not considered important enough to enter into popular lore?

From primary school I already knew all about the Conqueror, we had pictures around our classroom of poor Harold with the arrow in his eye (was it healthy for a seven year old to stare at that every day?)

But no mention of Isabella. Surely I couldn’t have slept through every history lesson since I was 5?

Yet Isabella did invade England and she was in fact the last person to do so successfully, despite the best efforts of the Spanish in 1588 and Hitler in more recent times.

Whatever else historians might say about her, it seems to me her political genius has not been given due credit. If you have not heard of Isabella - not to be confused with Queen Isabella of Castile - she was the queen of Edward II, (Longshank’s much maligned son.)

In 1325 she had been Edward’s queen for almost 20 years, but had been shuffled aside and was spending most of her time embroidering with her ladies and was not even given much access to her children. She decided for the good of the country or the good of Isabella - you decide - that she would take matters into her own hands.

She offered to cross to France and help mediate in the delicate ongoing negotiations between her husband and her brother - the kings of England and France respectively. She had proven her worth as a skilled negotiator in the past and Edward naively agreed to let her go.

Once there, she stalled for time and then - her masterstroke - somehow persuaded him to send their fourteen year old eldest son, and the heir to the English throne, to Paris to pay homage to her brother Charles and thus settle the tricky negotiations.

Edward and his adviser, Hugh Despenser, seemed not to realize that whoever had the son, had control of the English throne. 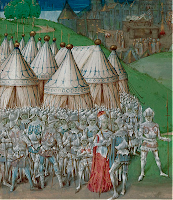 Once she had their son with her she then - with a little help from her friends - raised a mercenary army in his name. She invaded England, landing somewhere near Harwich.

The English nobility, tired of Edward and the rapacious Hugh Despenser, rallied to her side. Within a month she had her husband under arrest and assumed the throne of England as regent.

There was no grand battle as at Hastings. Edward was captured one rainy night making for the Welsh border on horseback with barely a dozen men still at his side.

Isabella has since been called The She-Wolf. That she may have been.

But her story is extraordinary one. Whether she was a saint or a sinner she deserves a place alongside the most remarkable women in European history.

Even if she never did shoot anyone in the eye.

Click HERE to read my review of "Isabella, Braveheart of France"!

Colin Falconer is the author of over twenty historical novels. See his blog page to see more posts about history and historical fiction.