BLOG TOUR: The Enemies of Versailles by Sally Christie 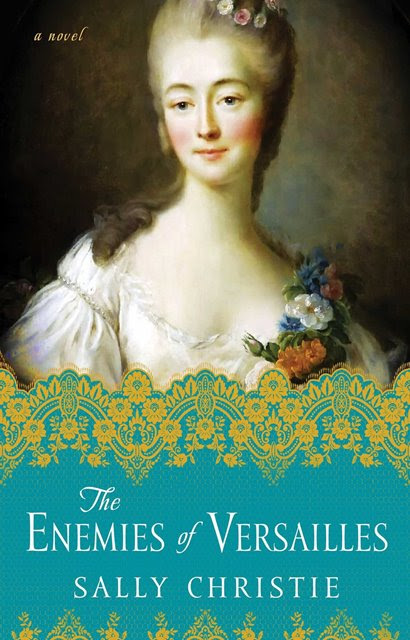 The Enemies of Versailles by Sally Christie

In the final installment of Sally Christie’s “tantalizing” (New York Daily News) Mistresses of Versailles trilogy, Jeanne Becu, a woman of astounding beauty but humble birth, works her way from the grimy back streets of Paris to the palace of Versailles, where the aging King Louis XV has become a jaded and bitter old philanderer. Jeanne bursts into his life and, as the Comtesse du Barry, quickly becomes his official mistress. “That beastly bourgeois Pompadour was one thing; a common prostitute is quite another kettle of fish.”  After decades of suffering the King's endless stream of Royal Favorites, the princesses of the Court have reached a breaking point. Horrified that he would bring the lowborn Comtesse du Barry into the hallowed halls of Versailles, Louis XV’s daughters, led by the indomitable Madame Adelaide, vow eternal enmity and enlist the young dauphiness Marie Antoinette in their fight against the new mistress. But as tensions rise and the French Revolution draws closer, a prostitute in the palace soon becomes the least of the nobility’s concerns. Told in Christie’s witty and engaging style, the final book in The Mistresses of Versailles trilogy will delight and entrance fans as it once again brings to life the sumptuous and cruel world of eighteenth century Versailles, and France as it approaches irrevocable change.

Having read the first two novels in this series, I couldn’t wait for Enemies of Versailles to come out! While it did start a little slower than the first two, it definitely picked up and I enjoyed it as much as the others in the series. Her portrayal of characters, both major and minor, is amazing. I always feel like I’m reading an actual historical novel, and that the dialogue and actions of these historical figures is how everything really played out in the past. The author, Sally Christie, obviously does her research when writing her novels, because everything she writes about feels like it could have actually happened the way it is written.

Madame Adelaide, the king’s daughter, is a bit difficult to take at times. She is so full of herself and believes that if SHE thinks one way about something, than everyone around her also thinks that way. In the end, I do believe she always means the best for those she loves, but she is a demanding figure that was very off putting for many in her time, and a big for myself as well! Comtesse du Berry was fun to read about. I had heard of her in a few books that I have read about Marie Antoinette, and she always came across as a horrible person. It was nice to see a different perspective of her. One that shows her as charming and sweet, yet not particularly intelligent, at least as far as book smarts go. However, she was raised the position she ended up in through more than just her good lucks. She knew what the king needed, and she became that person. The king was older, and he didn’t want a woman to match wits with, he wanted a woman to love him and in a way, to “mother” him. He definitely got that with Comtesse du Berry.

Overall, this book is a great read. I would definitely recommend the entire series to readers who are interested in historical fictions, especially in what was going on in Versailles that helped to lead up to the French Revolution. You get an idea of just how frivolous the people of wealth were during this time, and how little room they had in their minds to care about what was going on outside of Versailles. They were all in their own little world full of intrigue, far from the downtrodden people of France who had nothing. It’s easy to see how these people might become bitter after seeing the amount of money the court went through for unnecessary items. Definitely a great book worth purchasing!

Praise for The Sisters of Versailles

“Such an extraordinary tale makes for compelling reading and, as the lead book in a planned trilogy, will draw in readers who are interested in royal lives before the French Revolution….historical fiction fans, unfamiliar with the history of the Nesle sisters, will be intrigued.” (Library Journal)


"Sally Christie's The Sisters of Versailles is an intriguing romp through Louis XV's France. Filled with lush backdrops, rich detail, and colorful characters, fans of historical fiction will enjoy this glimpse into the lost golden era of the French monarchy." (Allison Pataki, author of THE ACCIDENTAL EMPRESS )

Sally Christie is the author of The Sisters of Versailles and The Rivals of Versailles. She was born in England and grew up around the world, attending eight schools in three different languages. She spent most of her career working in international development and currently lives in Toronto.

Visit SallyChristieAuthor.com to find out more about Sally and the Mistresses of Versailles trilogy. You can also find her on Facebook, Goodreads, and Amazon.

Five copies of The Enemies of Versailles are up for grabs during the blog tour! To enter, please see the Gleam form below.

Rules
– Giveaway ends at 11:59pm EST on March 31st. You must be 18 or older to enter.
– Giveaway is open to residents in the US only.
– Only one entry per household.
– All giveaway entrants agree to be honest and not cheat the systems; any suspect of fraud is decided upon by blog/site owner and the sponsor, and entrants may be disqualified at our discretion.
– Winner has 48 hours to claim prize or new winner is chosen.