GIVEAWAY & REVIEW: Blog Tour for In the Garden Room by Tanya Eby 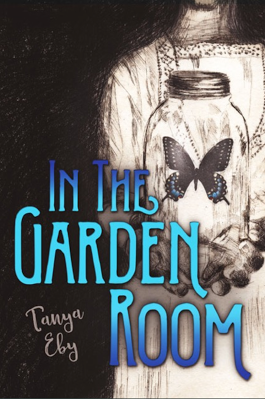 It is Chicago. 1910. Eleven-year-old Lillian March looks over her mother’s dead body with a sense of relief.

As a poor woman, her mother, Cora, never had any real choices or happiness with her life. Cora and Lillian flee to the bustling city of Chicago, where she is certain she will have the life of opulence she deserves.

Cora and Lillian face deep hardships in turn-of-the-century Chicago as Cora’s mind continues its downward spiral. With no money and no hope for income, Cora sells Lillian to The Garden Room, a brothel, where young girls and desperate women are kept like flowers in a jar.

John March comes looking for his daughter and his wife in an attempt to rescue them, but even if he finds them alive, is rescue really possible?

IN THE GARDEN ROOM is an exploration of madness, desire and two women’s choices in a time when they weren’t really allowed to choose.

In the Garden Room was a welcome reminder that sometimes it’s good to step outside of my usual genre of reading material, and try something a little different! While this novel is historical fiction, which is what I like, it is set in a period of time that I very rarely read about. I was immediately drawn in by Cora’s character. She the beautiful mother, who lives her life thinking about the “what if’s” and dreaming about being anywhere else in the world other than where she is at. She’s in a loveless marriage, which she believes she is too good for, and has a child who is something she considers to just be in her way. She a dreamer and she is naïve, which is the perfect combination for Zeke to take advantage of. She ends up leaving her husband, and dragging her daughter, Lillian along with her to Chicago. Cora has high hopes that she will end up wealthy and worshipped by Zeke, but things turn out nothing like she expected. Lillian loves her father, but now believes he is dead (thanks to her mother). The hard-scrabble city life turns Lillian into something she completely different than what she was when they arrived. Both Cora and Lillian change drastically, and do what it takes to stay alive in a city without mercy. Lillian’s father, John, is alive and well, and is determined to find his daughter and bring her home, but he has no soft feelings towards the wife who turned his life upside down.

It is definitely a darker novel, and it’s easy to get caught up in the strong emotions that each of the characters displays. I definitely felt a little depressed and shocked at times as I read. As a mother, it was difficult for me to imagine ever putting my children in the position that Cora placed Lillian. It is definitely the type of book that is hard to put down once you get into it. I typically read historical fiction that is set prior to the industrialized age, but I am glad that I gave this one a chance. I definitely suggest picking a copy up, you won’t be disappointed! A solid FIVE out of FIVE stars from me! 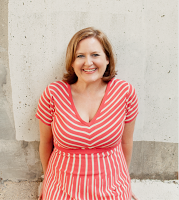 Tanya Eby is a writer and an award-winning audiobook narrator. She has published a variety of novels from romantic comedies to mysteries to dark historical pieces. While her writing crosses genres they all share quirky characters and complicated relationships. Visit her at tanyaeby.com or follow her on Twitter @Blunder_Woman.

Audible Download of Tanya Eby novel In the Garden Room! 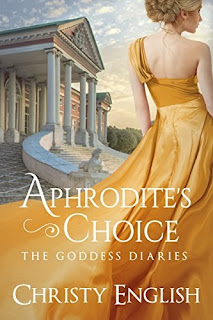 How does a writer go from obsessing about Eleanor of Aquitaine to being possessed by the need to write about a goddess? For any of you who have read my historical fiction novels THE QUEEN’S PAWN or TO BE QUEEN, both of which have Eleanor of Aquitaine as a narrator, you know that it is not that far a leap from queen to goddess. Indeed, I think Eleanor would have enjoyed the comparison.

But as with more than one of my novels, APHRODITE’S CHOICE first came to me in a dream.

During the summer and fall of 2010, I was traveling around the Southeastern US going to book signings and literary festivals to support my first published novel, THE QUEEN’S PAWN. While I did this, I took time out to see friends and family along my route, and I stopped at my godmother’s on my way back to my home base (at the time, that was Wilmington, NC.) We got to talking about books, as we so often do, and she asked me why I had never written a paranormal novel, a genre she loved to read.

I didn’t have an answer for her, other than to say that a character with a paranormal story had never shown up on the doorstep of my mind. If one ever did, I said, I was sure to write it. Because, in my world, the book is always the boss.

That night I slept well, tucked away in her frilly guest bedroom downstairs. And as the early morning light began to creep in at the windows, I dreamed of a goddess of love, of her mortal friends, and of the man who was hunting her.

The first fifty pages of the novel came from my very involved, very detailed dream, pretty much as they appear now in APHRODITE’S CHOICE. While my Aphrodite, or Addy Stanfield as she calls herself in modern Boston in 2016, is an immortal being who came down to earth to offer an aspect of the healing of Divine Grace, she is also a woman. A woman with a perspective out of time, a woman who belongs to all times and places, and to none. 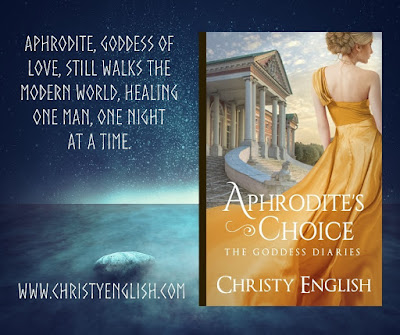 Addy loves her mortal friends, though she knows that she will very likely live long enough to watch them die. She keeps an immortal lover, the war god Ares, who comes into and out of her life on his own whims, and in his own time, often wreaking havoc as he passes through her world. And for the last eight hundred years or more, the same group of men has hunted Addy and her sisters, fellow goddesses who do the work of serving humanity, each in their own way. This group, the Brotherhood of the Light, destroy her sisters when they can, and as the novel opens, Addy discovers that they have found her yet again.

Paranormal thrillers are a lot of fun to read, but before APHRODITE’S CHOICE, I had never written one. She opened my eyes to a whole new world, as each of my characters has, as I pray each new character always will. I am very grateful for that conversation with my godmother, and her off-the-cuff question about paranormal story-telling. My life is infinitely richer for having met and worked with Addy, and I hope that, if you read her story, she enhances your life half as much as she has blessed mine. 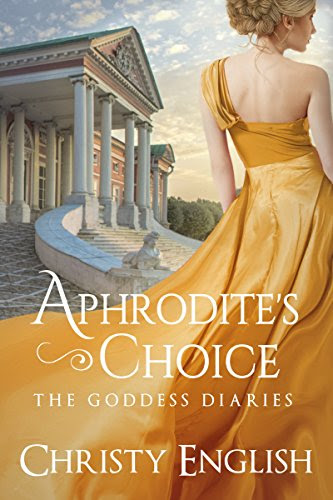 
Aphrodite, Goddess of Love, still walks the modern world. No longer thronged by worshipers, Aphrodite heals the bodies and souls of the men she touches, one man, one night, at a time. But not everyone thinks of her as a long-dead myth. Someone is stalking her. The men who have hunted her kind as witches for centuries have passed their hatred on to their sons. As she flees her enemies and tries to warn her sisters of the danger facing them once again, Aphrodite is followed by one of the members of the Brotherhood, a man who has been given the task of killing her, and any of her sisters who cross his path. But it does not take her long to discover that Steven Wharton is not a murderer, and his soul is one she has known before. In this paranormal romance, a goddess’s past is brought to life, from the Greek city of Corinth to the shores of the island of Cyprus, at the court of Versailles to the burning city of Persepolis. But it is not until she meets Steve that Aphrodite falls in love for the first time. As she faces an ancient enemy, Aphrodite discovers that the love she feels, not the love she gives, is the root of her soul. And that love might even be the path to her freedom...

I have been a fan of Christy English for several years now, and one of my favorite things about her novels is the seamless way that she is able to weave historical fact and fiction into her stories. “Aphrodite’s Choice” is more of a paranormal romance novel, and less of a historical romance/fiction novel, yet the reader is still transported to the past with Ms. English’s fantastic descriptions and well-researched historical details. As Aphrodite has been around for 9,000 years, her story covers many different periods of history, as well as fascinating places like Versailles, Corinth, Cyprus, etc.

Despite being the Goddess of Love, Aphrodite has somehow avoided truly falling in love during her many, many interactions with members of the opposite sex. That is, until she meets Steven Wharton, who is a danger to more than just her heart. Aphrodite (who goes by Addy in modern times) is faced with the daunting task of not only keeping herself safe from those who want to destroy her, but also to protect her sisters. This novel is full of drama and intrigue, and the author does a great job of creating romance and passion, without it coming across as a tacky bodice-ripper. Paranormal romance is definitely not a genre I would normally read, but I wanted to give it a chance after I discovered that Christy English was the author. There was enough of a historical aspect added to the novel to keep my interest, so in the end I was happy that I gave it a chance. I probably won’t run out and look for another book in this genre, but I enjoyed “Aphrodite’s Choice” enough to give it a FOUR out of FIVE stars!

Ever since Christy English picked up a fake sword in stage combat class at the age of fourteen, she has lived vicariously through the sword-wielding women of her imagination. Sometimes an actor, always a storyteller, Christy works happily with Sourcebooks Casablanca to bring the knife-throwing women of her novels to life. A banker by day and a writer by night, she loves to eat chocolate, drink too many soft drinks, and walk the mountain trails of her home in western North Carolina. Please visit her at http://www.ChristyEnglish.com. You can also find Christy on Facebook, Twitter, Goodreads, and Pinterest.

To win an eBook of Aphrodite's Choice by Christy English, please enter via the Gleam form below. 5 eBooks are up for grabs!

– Giveaway ends at 11:59pm EST on September 9th. You must be 18 or older to enter.
– Giveaway is open Internationally.
– Only one entry per household.
– All giveaway entrants agree to be honest and not cheat the systems; any suspect of fraud is decided upon by blog/site owner and the sponsor, and entrants may be disqualified at our discretion.
– Winner has 48 hours to claim prize or new winner is chosen.