THE BURNING CANDLE: A MEDIEVAL NOVEL by Lisa J. Yarde 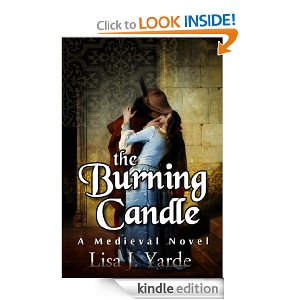 Love is for women who have choices. She has none.

In eleventh-century France on the eve of the First Crusade, Isabel de Vermandois becomes the wife of a man old enough to be her father. He is Robert de Beaumont, Comte de Meulan. A hero of the Norman victory at Hastings and loyal counselor to successive English kings, Robert is not all Isabel had expected. Cruel and kind by contrast, he draws her into the decadent court of King Henry I. As Robert's secrets are unraveled, Isabel finds her heart divided. Her duties as a wife and mother compel her, but an undeniable attraction to the young William de Warenne, Earl of Surrey, tempts her. In a kingdom where love holds no sway over marital relations, Isabel must choose where her loyalties and her heart lie.

Based on the life of a remarkable medieval woman forgotten by time, The Burning Candle is a story of duty and honor, love and betrayal.

This is the first book that I’ve read by Lisa J. Yarde, and I was pleasantly surprised by it. I think that the author really did justice to this time period. The characters at times come across as ‘cold’, but that’s part of the reason I believe the novel felt ‘real’ to me. People during the Middle Ages aren’t really thought of as being exceptionally loving or soft. So many children died young, and marriages between royal and/or wealthy people were often arranged, so in order to survive I believe the people had to be a little ‘cold’.


I really enjoyed reading Isabel’s story as she grew from an abused child to a moderately happy woman. Part of the reason I enjoy historical fiction, is the fact that I am able to get a feel for how this real person, from history, may have actually felt or acted. I think that the way Isabel’s character is described is perfect. She is a strong woman, and though as a reader you may dislike her at times, you also are able to relate to her, because she’s not perfect. I really enjoyed reading about the relationship between her and her husband, Robert de Beaumont, who she was contracted to marry at such a young age. I feel it clearly showed the true dynamic of many royal medieval marriages. The author obviously uses her creative license, but it definitely helped to make the story more interesting. And, Thorold’s character was the perfect villain!  His twisted influence in the story definitely helped to add to the suspense.


The thing that truly makes a historical fiction novel great for me is the addition of a love story, and the love story in this novel is amazing. As a reader, you are able to see the hardships that Isabel has suffered all of her life, and I think the love story helps to lighten the book up a little and to give the reader a little hope. I was completely caught up Isabel’s story, and the fact that the novel is based on actual historical figures and situations, makes it that much more interesting as a reader.

I would recommend this book to anyone who enjoys historical fiction from the medieval time period. I read it in two days, and had trouble putting it down. I love reading novels based on actual historical figures, especially people like Isabel, who led such fascinating lives. The only issue I had with this novel is the grammatical errors. The book definitely needs to be proof read again, because it’s frustrating to be reading an amazing book, only to keep coming across spelling/grammar errors.

I give this novel five out of five stars.

THE TIME OF THE WOLF by James Wilde

1062, a time many fear is the End of Days. With the English King Edward heirless and ailing, across the grey seas in Normandy the brutal William the Bastard waits for the moment when he can drown England in a tide of blood. The ravens of war are gathering. But as the king's closest advisors scheme and squabble amongst themselves, hopes of resisting the naked ambition of the Norman duke come to rest with just one man: Hereward.

To some a ruthless warrior and master tactician, to others a devil in human form, Hereward is as adept in the art of warfare as the foes that gather to claim England's throne. But in his country's hour of greatest need, his enemies at court have made him an outlaw. To stay alive—and a free man—he must carve a bloody swathe from the frozen lands outside the court, in this evocative tale of a man whose deeds will become the stuff of legend.

I have read many historical fiction novels that take place in medieval times, but this was the first novel I've read that took place during this time period (1062). I didn't have much background knowledge regarding William the Bastard or King Edward. All I really knew was that the Norman Conquest took place in 1066, but not what led up to it, so it took me a little while to catch on to what exactly was happening and who the people mentioned in this novel were. I admit, I had to do some googling while I was reading this book. However, after finishing this novel, not only did I have knowledge regarding this time period, but I also found that I was extremely interested in learning more about England during the Norman Conquest.

It is a bloody, violent novel, full of betrayal, and it stays that way from beginning to end. The main character, Hereward, is an extremely violent and vengeful character, but the author gives him an element of mystery, which allows the reader to believe that he is a good person underneath all of his external acts of violence. Alric, the monk who accompanies Hereward, is the perfect foil character. He helps to balance out Hereward's violent personality. Both characters are extremely strong, believable, and well written. I was able to clearly imagine what they would be like, and their stories fit in perfectly with the overall 'dark' feeling of this novel.

I tend to enjoy historical fiction novels that have a little more romance in them. However, Hereward and Alric were both such strong characters, that this novel had no problem keeping my interest from beginning until end. I would definitely recommend this novel to historical fiction fans who have an interest in this time period, especially those who love a novel that deals with betrayal, revenge, and violence.