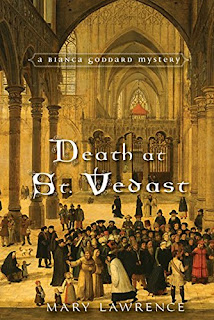 During the tempestuous reign of Henry VIII, London alchemist Bianca Goddard has seen up close what keeps a man alive—and what can kill him. A good thing, for she will need all her knowledge to keep a friend away from the gallows . . .

Bianca and her husband John are delighted to share in the glad fortune of their friend, Boisvert, the silversmith, who is to wed Odile, the wealthy widow of a goldsmith. But a pall is cast over the upcoming nuptials when the body of a pregnant woman is found beneath the bell tower of St. Vedast, the very church where the betrothed are to be married.

Tragedy strikes again at the couple’s reception, when Odile suddenly drops dead in the middle of the wedding feast. The constable suspects Boisvert poisoned his new bride for her money, but there’s not a trace of poison in her food or wine. Could the two deaths be connected? To prove their friend’s innocence, Bianca will need to employ her knowledge of alchemy—for if she can determine how the bride was killed, she may find the person responsible for her murder—before another victim is added to the death toll . . .

This is the third book in a series involving the talented and intelligent alchemist, Bianca Goddard. I was immediately drawn to this novel, as it is set during the reign of King Henry VIII. This was a time period where no one was truly safe, even the king's wives. Whether it be disease, childbirth, infection, witchcraft, plague, or other illnesses, both physical and mental; it was a very dangerous time to be alive in!

Bianca is determined to discover what is causing the mysterious deaths that are happening right around and involving the Church at St. Vendast. In one instance a pregnant woman climbs to the top of the church spire, all while singing and acting in an insane manner, than falls to her death. Then there is another death, this one a wealthy widow. Bianca begins to piece together this mystery, and the reader is kept on the edge of their seat as she does. I found myself wanting to skip pages to find out what was going to happen next! The writer definitely has a great talent when it comes to writing mystery novels. Usually I am not a huge fan of mysteries, however I love most novels that are set during medieval times, especially Tudor times, and this novel is no different.

If you're looking for a novel that is going to keep you up at night, because you can't put the book down until you find out what happens next, than this is perfect for you! It's a lovely historical mystery novel, and I definitely recommend it!

Mary Lawrence lives in Maine and worked in the medical field for more than twenty-five years before publishing her debut mystery, The Alchemist’s Daughter (Kensington, 2015). The book was named by Suspense Magazine a “Best Book of 2015” in the historical mystery category. Her articles have appeared in several publications, including the national news blog The Daily Beast. Book 2 of the Bianca Goddard Mysteries, Death of an Alchemist, released in February 2016.

Visit the author at www.marylawrencebooks.com.
at 2:59 PM