What is the nature of love? Of control? These big questions without easy answers are the heart of the book, as we watch Antinous come to his own conclusions about both.
No one knows what happened to the real Antinous. All that is known is that he drowned in the Nile and then Hadrian deified him. McDonald has given us the imaginary voice of a young man whose image has been immortalized in busts and sculptures, a young man who may very well have been as haunted as his death is mysterious. 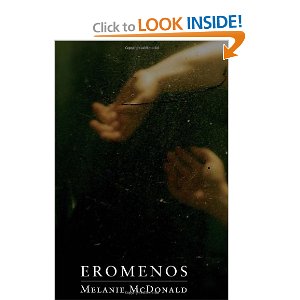 It was extremely refreshing to read this novel. Not only because it was about a period in history that I am not very familiar with, but also because it shows a side a history that people don’t often talk about. Historical Fiction will always be my favorite, but sometimes it does get a little repetitive, especially when you’re reading novels about the same historical figure, but by different authors. One of the main reasons Eromenos is so refreshing is because it takes the genre I love, but throws a twist into it, a very good twist!

During Greek and Roman times it was acceptable for powerful men, such as Hadrian to sleep with and love young men. I love that this book gives the reader a whole new perspective on love and relationships during this time. I think there will be some readers who are too narrow minded to enjoy Eromenos, but I am definitely not one of them. It was a short, easy read but it was also full of information about the most powerful man of his time, Hadrian, who was the ruler when Hadrian’s Wall (obviously named for him) was built in England. This was during the time when Roman’s still ruled the majority of land, including most of present day England. It is about intense love and loss, and it was a fascinating read that opened my eyes to a whole new genre of literature.
I commend the author for this book, which was exceptionally well-written, informative, and tasteful.  Not to mention one of the most original love stories that I’ve had the pleasure to read.  Open-minded readers who are interested in time period should definitely purchase this book. It’s rare to find a historical fiction novel that is open to expanding boundiaries, and changing what you thought you knew about the historical fiction genre. My only complaint is that it was so short. I wanted to know more about the lives of Hadrian and his lover, and I think it easily could have been longer and more detailed. Other than that I was pleased, and in my opinion the book deserves a four out of five stars.
PURCHASE BOOK HERE!!
at 1:09 AM