BOOK REVIEW: The Spider and the Stone: A Novel of Scotland's Black Douglas *5 Stars* 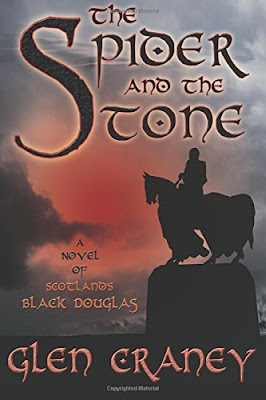 The Spider and the Stone: A Novel of Scotland's Black Douglas
Paperback and ebook editions
432 pages
Brigid's Fire Press (2014)

She will crown a king.
He will carry a king’s heart.
Both will pay an unthinkable price for Scotland.

As the 14th century dawns, Scotland’s survival hangs by a spider’s thread. While the clans fight among themselves for their empty throne, Edward Longshanks of England schemes to annex the northern kingdom to his growing realm.

But one Scot lad refuses to move from the brutal monarch’s path.

James Douglas is cherished by his fellow countrymen as the Good Sir James. Yet his daring raids across the border wreak such havoc that the English brand him the Black Douglas and nearly bankrupt their treasury to capture him. As a boy, James falls in love with the ravishing Isabelle MacDuff, whose clan for centuries has inaugurated Scottish kings on the hallowed Stone of Destiny. Their bliss is threatened when James befriends Robert Bruce, a bitter enemy of the MacDuffs. Forced to choose between love and clan loyalty, James and Isabelle make a fateful decision that will lead the armies to the bloody field of Bannockburn.

This is the little-known but true story of Scotland’s War of Independence and the remarkable events that followed the execution of William Wallace, whose legend was portrayed in the movie Braveheart. At last, James Douglas takes his rightful place with Wallace and Bruce in the pantheon of Scottish heroes. This thrilling epic leads us to the miraculous Stone of Destiny, the famous Spider in the Cave, the excommunicated Knights Templar, the suppressed Culdee Church, and the unprecedented Declaration of Arbroath that inspired the American Declaration of Independence four hundred years later.

The Spider and the Stone is the unforgettable saga of star-crossed love, spiritual intrigue and heroic sacrifice that saved Scotland and prepared the way for the founding of the United States.

“The Spider and the Stone: A Novel of Scotland’s Black Douglas” by Glen Craney is the best book I’ve read this summer! I have been extremely interested in Robert Brue and James Douglas for several years now, even since reading a trilogy about Robert Bruce a few years back. All of the novels that I have read about this time period have been focused on either Queen Isabella, King Edward II, Mortimer, Robert the Bruce, etc., so a book with the focus on James Douglas, Bruce’s right hand while fighting the English, was exactly what I had been wanting to read! The author, Glen Craney, does an amazing job taking the reader through Scotland during the time that Longshanks (King Edward I) and his inept son, King Edward II, were attempting to bring Scotland to its knees. The strength and fortitude that Douglas, Bruce, Randolph, and the Scottish people had during this time period was almost unbelievable. The author does note at the end that much of Douglas’ history is based on legend, but in order to inspire those legends, I’m sure the stories must have had some truth to them. The descriptions of Douglas’ methods of fighting the English are completely ingenious. The Scottish were outnumbered by thousands, yet Douglas had a deep-seated understanding of battle tactics, and the English were no match to his methods on the battle field. Not to mention the absolute respect and devotion he inspired in his men, which caused them to follow him anywhere, and never question his command. He inspired Robert the Bruce to be a good and just king, and inspired Scotland to fight for its freedom. This did not come without personal sacrifice for James Douglas, and though it is not a historical fact that he and Belle, The Duchess of Buchan, were in love. This does add an interesting romantic element to the novel, and definitely becomes a driving force for James Douglas.

I had put off reading this book for a little bit, because I was finishing my master’s degree, and there were other books on my list. Now that I know just how amazing this book is, I wish that I had read it as soon as the author sent it to me for review. So, I do apologize to the author for not getting to it sooner. Once I began reading it, I honestly had difficulty putting it down at night to go to sleep. It is the perfect novel to get wrapped up in if you are a fan of historical fiction. There is a lot out there about this period in time. Anyone who has ever watched Braveheart knows how fierce the people of Scotland were, and how hell bent they were on keeping their independence from England. “The Spider and the Stone” delves a little deeper into some of the legends and tales that were born during this period of time. Usually I am not a fan of anything that leans towards fantasy or the supernatural in historical fiction novels, but the author does it in a way that brings to attention Scottish lore and legend, but does not make that part the forefront of this novel.

I 100% recommend getting your hands on this novel. It’s a great read, and really gives you a up close look at one of the most fascinating periods of time in Scotland and England’s long history that was fraught with chaos and discord.

Definitely a FIVE out of FIVE stars from this historical fiction fan! 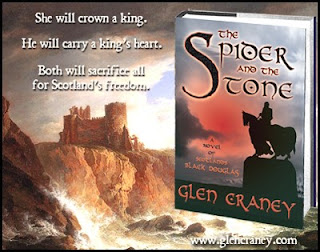 "The book is an interesting, well-crafted scenario ... [Craney] has woven an interesting tale proposing that the crowning of Robert the Bruce occurred largely because of the help and sacrifice of James, Scotland's Black Douglas and the love of his life, Isabelle MacDuff." — Historical Novel Society

"The best book I've read this year." — John Graham, seneschal of the Society of Creative Anachronism

"The battle scenes are detailed and vivid, giving the reader a ringside seat at Scotland's desperate fight for freedom. ... 'Spider' will hold readers in suspense. ..." — InD'tale Magazine

A native Hoosier, GLEN CRANEY is a screenwriter, novelist, journalist, and lawyer. He holds degrees from Hanover College, Indiana University School of Law-Indianapolis, and Columbia University's Graduate School of Journalism.

As a member of the Washington, D.C. press corps, he covered national politics and the Iran-contra scandal for Congressional Quarterly magazine. His feature screenplay, Whisper the Wind, about the Navajo codetalkers of World War II, was awarded the Nicholl Fellowship prize by the Academy of Motion Pictures, Arts and Sciences for best new screenwriting.

His debut historical novel, The Fire and the Light, received several honors, including being named Best New Fiction by the National Indie Excellence Awards and a Finalist/Honorable Mention Winner by Foreword Reviews for its Book of the Year in Historical Fiction. In 2014, he was named a double BOTYA finalist by Foreword Reviews for The Spider and the Stone and The Yanks Are Starving. He is also a two-time recipient of the indieBRAG Medallion.