Twenty year old Diana Forester, a country bred young woman fears that her inexperience and uncertainties has driven Mr. John Richfield away. On arriving back home from London, she learns that he is already there, ready to continue their acquaintance. If Diana thought that it was difficult in London, courting takes on a whole new aspect when Diana's younger siblings become involved. She finds herself dealing with her own feelings, her sister, her younger brother, jealous members of a house party, a jilted suitor, and a highwayman as she falls in love with the charming Mr. Richfield.


First of all, I’d like to say I’m honored to be a guest here today. I make no claims at being an expert of the Regency era, or a historian. I can only offer my own opinion based on what I have learned from my research.

Many Regency based novels feature daring ladies, either with a title of their own, breathtaking beauty, or the wealth to grant them entry into the highest level of society. An official coming out, with balls and soirees, vouchers to Almack’s, all with the aim of marrying well. But what about a well born woman from a more humble background?

From infancy, a girl would be trained to manage a household. Likely, due to her family’s circumstances, this practical training, along with accomplishments such of a musical or artistic nature, would come from her mother. Once she reached the age of about seventeen, a young woman ought to have been ready to move on to the next stage in her life: marriage.

Of course, meeting an eligible man could present a bit of a problem. Being raised in a small community, young lady might be required to seek such a man elsewhere. Spending a season in London would have been near impossible. She would have to rely on an invitation from family members to visit new places where she would have the opportunity to expand her circle of acquaintance.

In a time when men held all the power, a woman really only had one right: she could accept or refuse a gentleman’s offer of marriage. This would not be a simple decision for her. After all, this was a decision that would set the course for her entire future. Not to mention, how the expectations of her family and friends would be a strong motivator for her.

Still, a young lady with patience could find love, if she kept her wits about her and took advantage of every opportunity presented to her.

“I thought you’d never get here!” Sarah said, ignoring my question completely as she spun to face me. I frowned at her as I put my outside garments away. She seemed highly agitated, a state which I had seldom seen her in. “Diana, I must speak with you!”

“About what?” I asked calmly.

Sarah took up pacing, and for a moment I believed she wasn’t going to continue with whatever she wanted to say. “You must listen to me for once in your life!” she finally said, as
though I had been disagreeable.

Sinking onto our bed, I tried to hide a smile. “Then come out and tell me what has you in such a state.”
“I think Mr. Richfield is the highwayman!”

My smile faded instantly as I stared at her. How had she come up with this ridiculous idea? “You what?” I asked in astonishment.

“There, I’ve said it!” Sarah collapsed into the chair at the dressing table. “I’ve considered the matter carefully, Diana, and as your sister, I could not let you become attached to such a black-hearted criminal!”

I couldn’t help but laugh in response to that absurd notion. “Blackhearted criminal? You cannot be serious, Sarah. I have never heard anything so outlandish. Have you been reading my novels?”

“Diana, I am being completely serious! Stop laughing!”

“How can I take you seriously when everything you say is utter nonsense? Why would you possibly think Mr. Richfield, a true gentleman if I’ve ever met one, is a common criminal?”

Sarah leaned forward, her eyes wide. “Don’t you remember what Aunt Forester said at dinner yesterday?” she asked, lowering her voice for some reason. She acted like she was about to disclose some deep secret to me, and I found myself leaning closer. “About the highwayman being around the Bath area?”

Thinking back, I did in fact remember the conversation and our aunt’s comment. “Yes, of course I remember. What about it?”

“Mr. Richfield was there!”

I failed to follow her line of reasoning. “I’m sure a great many people were in Bath at the same time, Sarah. Aunt and Uncle Forester, for example, were there for two months, I believe.”

Shaking her head, Sarah groaned. “Don’t be obtuse, Diana! You have to see the connection here. Mr. Richfield was in Bath when a highwayman terrorized innocent people. And now, he’s here, where a highwayman has mysteriously appeared to threaten our peaceful home!”


For as long as she can remember, Bethany Swafford has loved reading books. That love of words extended to writing as she grew older and when it became more difficult to find a ‘clean’ book, she determined to write her own. Among her favorite authors is Jane Austen, Sir Arthur Conan Doyle, and Georgette Heyer. When she doesn’t have pen to paper (or fingertips to laptop keyboard), she can generally be found with a book in hand. In her spare time, Bethany reviews books for a book site called More Than A Review.

Giving away a PDF copy of A Chaotic Courtship! 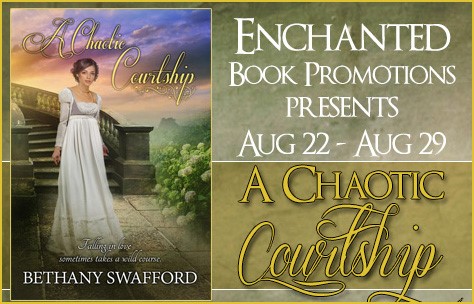